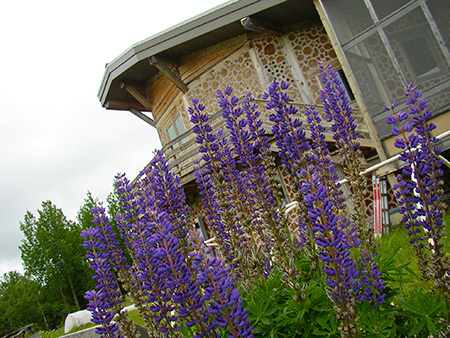 Another snowy winter has passed and a reasonably early start to spring has led to a beautifully cool summer so far in the Upper Peninsula. We spent a good chunk of the winter (when I wasn’t enjoying skiing on my newly-mended foot) sorting fallen ceiling boards, removing the old nails, and putting them back into place.
We had blown cellulose insulation into the ceiling ourselves, which worked out great until we got to the peak of the ceiling, at which point I had stuffed bags of foam insulation scraps into the open space as best as I could, then holding them in place with squares of blue styrofoam. That was good from the standpoint of not wasting the insulation we had trimmed from the walls in order to fit the logs when doing the inner wall, but not the best from an insulation standpoint – there were gaps between the bags and we wanted a tighter seal.
I figured that since I had to re-do the ceiling, and since the peak was now accessible again, it would be a good idea to do the insulation at the top the way we really wanted it.
I used a spray-foam kit from a big box store – it’s similar to the cans of spray foam that you can get, but covers a lot more area, and comes in the form of two tanks whose contents get mixed together at the spray nozzle. It’s messy work, and requires a respirator and sacrificial clothes, as well as protecting the rest of the house with plastic dropcloths, since tiny droplets of foam get everywhere. I hope to not ever have to do that again. After I was done, the bays between the rafters all had at least six inches of foam in them, sealing the ceiling but good. 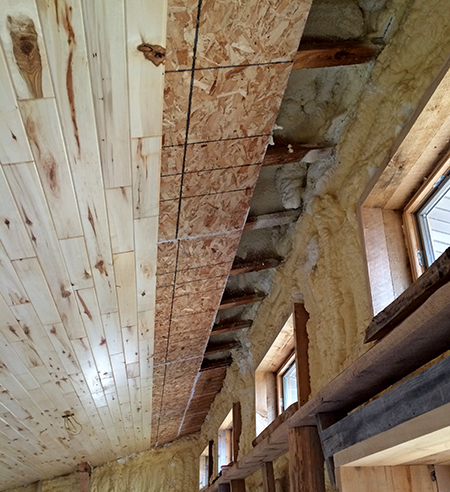 Once again, I crammed bags of insulation scraps into the bays and locked them into place with blueboard: 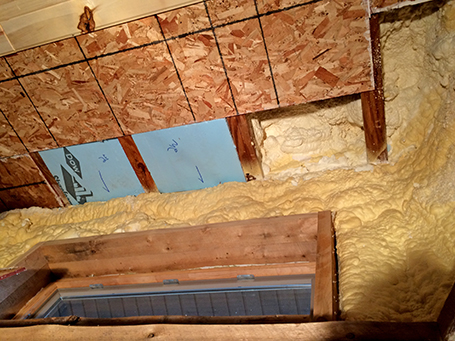 Finally, I put back the OSB sheathing and re-spackled the joints, and nailed up the final courses of knotty aspen paneling on the ceiling. As you might imagine, I used stout screws in the top course, to prevent anyÂ re-occurrencesÂ of fallen ceiling syndrome. You can’t tell that there was ever a ceiling drama now, and the house is better insulated for it. 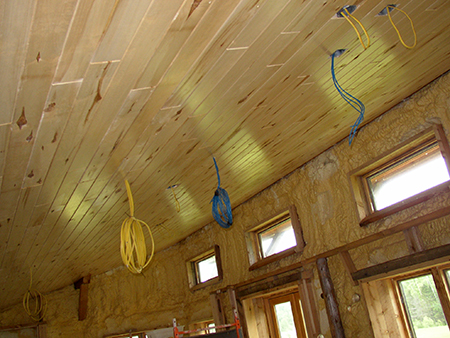 I started writing this post in June, when the lupins were in high bloom, as you can see from the first picture. Our next task: finish cordwooding the walls!

2 Replies to “Living on the Ceiling”