Once again, the weather has warmed up enough to cordwood without fear, so we pick up where we left off last fall; namely, the second floor. Here we are starting the bedroom wall – pretty quick since it’s mostly door. Notice that we nailed strips of wood to the door frame where it gets filled in with logs and mortar We also put these strips on the timbers. This helps “key in” the mortar, locking the cordwood wall to the frame – a “best practice” used by many cordwood builders these days. 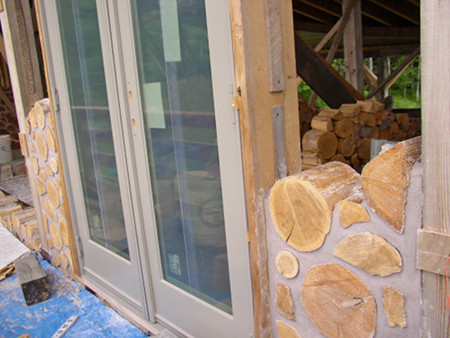 By the end of June, we’ve finished the front face. The open spaces above the cordwood and below the roof will be rough-edge cedar siding; it’s just a bit too high to lay logs. 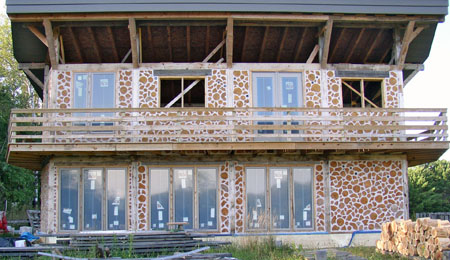 Some of the lupin seeds we’ve been scattering near the house are starting to blossom. I say, let nature do some of the work of decorating the yard. 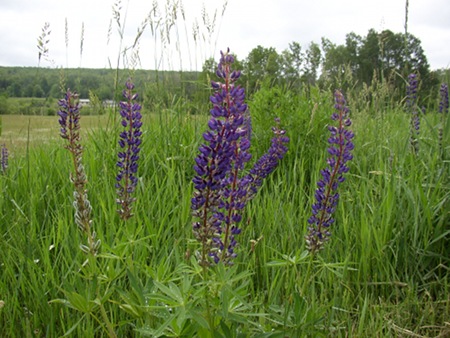 One of the (few) benefits of taking so long to build this house is that we’re able to save up a bit of cash along the way. We can use this to hire out some of the things that would take us forever to do ourselves, like the roof. It became clear that another one of these things would be the wraparound deck and porch. The deck is very important in that it will keep the rain off the first-floor cordwood walls. The large roof overhangs protect the walls higher up, but it’s a long way from the roof to the first floor.

We contacted our builder pal John Hamilton (he of roof-putting-up fame) and asked him to quote out the job. The quote looked good to us, so we asked when he could start. He had some time at the end of April; this was also a good time because he could beat the biting bugs (who deserve a good beating).

So, while we continued prepping logs and getting the house site cleaned up after winter, John and his merry men got to work. Their first task was to extend the interior floor joists to the outside using treated lumber, and nail a board (rim joist) across the ends: 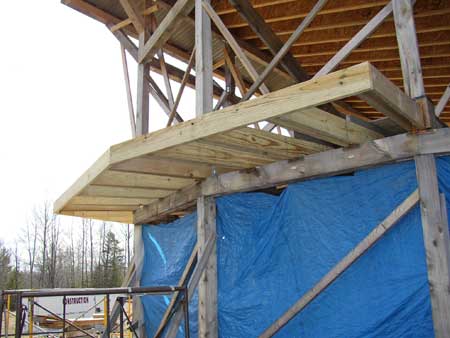 Next, they laid down deck boards, fixed posts at the edge of the deck, and installed rails: 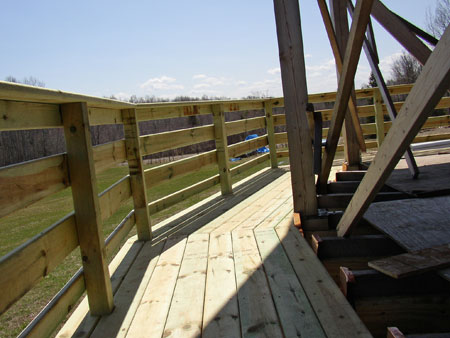 Here’s the nearly completed deck. Note that there are no posts holding it up, it’s all cantilevered out from the inside floor joists. Because of this, using synthetic decking was out of the question; it’s much heavier than the treated lumber we used, and the engineering gods said no way to that kind of extra weight: 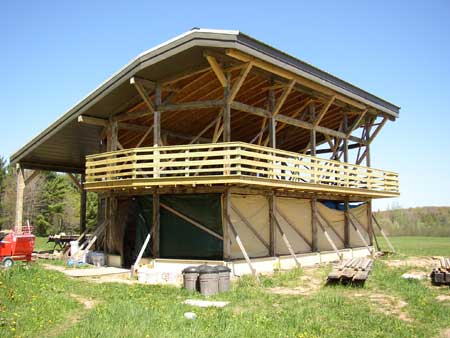 The final (extensive) task was to build a screened-in porch under one of the rear roof overhangs. Clare had the idea to raise it a few feet off the ground and have one set of stairs going from the back of the house to the porch, then from the porch to the deck. John and his crew did a great job helping us figure out the details, then making it happen: 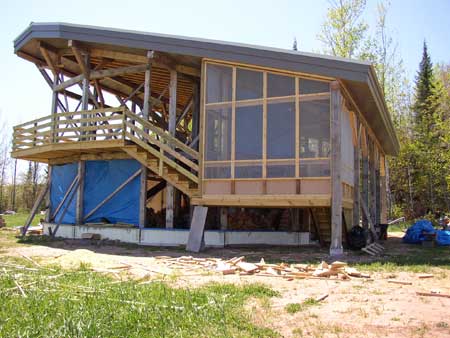 Now we have a really sharp-looking place to eat lunch and get out of the sun and bugs, and it won’t always be blowing over like last year’s tent. 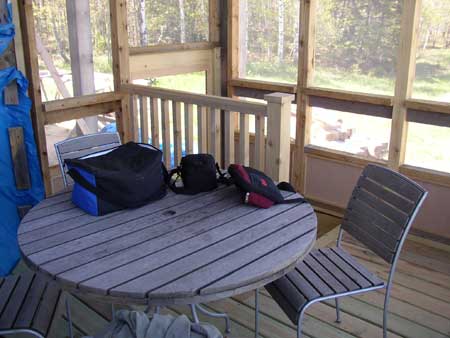 Woohoo! Here come some early (for us in the frozen wastes) spring flowers. Marsh marigold in the vernal streams: 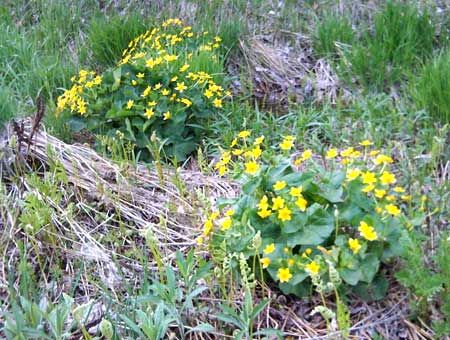 And wild strawberries everywhere else: 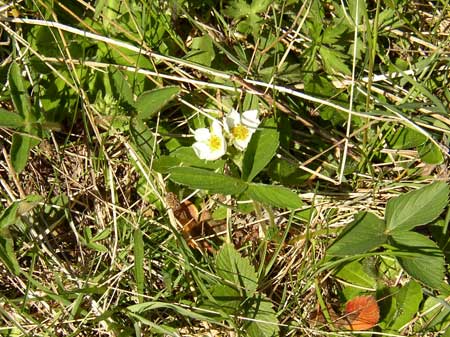 The strawberries they produce are tasty, but no bigger than a blueberry.