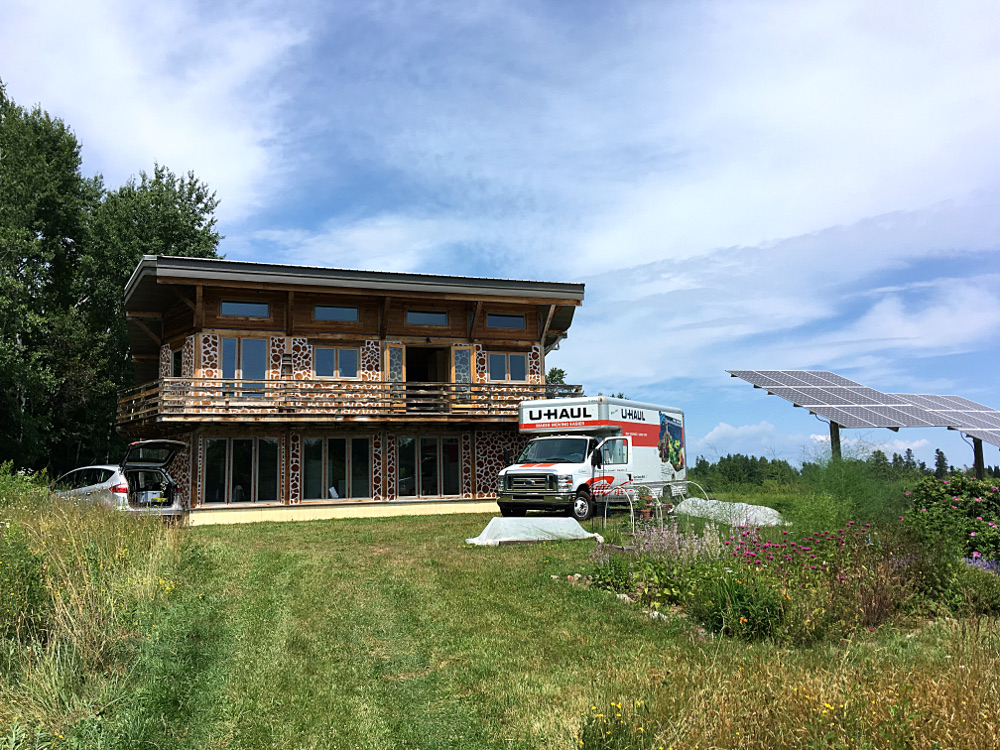 Most people who build their own cordwood home seem to take a couple, three years to finish. I figured it would take us five. Well, ten years and eleven months after we broke ground, we finally moved into Nerdwood. And we’re not quite done with it yet.

By June of 2017, we had less than two months to get done whatever we could on the house, while packing up our apartment. I had run the drain plumbing to the second-floor bathroom, but we also needed to put in supply piping and electrical before we could drywall the bathroom and closets. If nothing else, we were determined to have the drywall done and painted, because who needs to deal with that mess while living in your house?

Here’s the shower, all plumbed and ready to go. Including the steam unit, although the steam door is going to have to come later. Not being able to take a sauna wasn’t too bothersome in the middle of the summer.

We knew it would take us forever to drywall, and that we wouldn’t do a very good job, so we were fortunate that our friend and builder extraordinaire John Hamilton was able to spare one of his crew, Chris, to take care of it. As move-in bore down upon us, Chris got to work on the walls. Here they are with all the plumbing and electrical done, waiting for drywall:

And here they are in the middle of the job:

So far we have left the deep window bays as-is, with unfinished rough-sawn cedar window boxes. I hit the bathroom window boxes real quick with the sander, and Clare finished them with clear polyurethane to stand up to the moisture. Clare also sanded and finished the remainder of the window trim pieces that we never got around to putting up when we finished installing the windows in 2010 (!).

I nailed in the trim real quick and put in the rest of the screens. Man, do we get a lot of breeze blowing through the house when all the windows are open!

While Chris did the drywall and Clare did the trim, I started putting in the maple flooring on the second floor.

At first, I was using the nail gun to nail in the floorboards, but Chris suggested I ask John Hamilton to borrow his pneumatic flooring nailer. That thing uses a mallet to simultaneously push the floorboard tightly against it’s neighbor, and to trigger the nailer to shoot the nail in. Here it is in the foreground, to the left:

The flooring company, Keweenaw Specialty Woods, suggested we screw the centers of the boards down, since we were using their widest boards (6 inches wide), which can be prone to cupping if you don’t screw them in. As I nailed in boards, Clare came behind me to drill a shallow hole in the center, put in a screw, then glue in a maple plug. You have to look pretty closely to see where the plugs are.

At this point, our move-in date was just over a week away. Chris had finished drywalling and painting the bathroom.

We put in the final floorboard, and I got to work sanding and finishing the floor. We used a water-based finish that came highly recommended (Bona Mega), partly because it takes weeks for oil-based finishes to off-gas and we were moving in next week. Also, partly because it’s a very tough finish and it doesn’t yellow, so it would be a nice contrast to the yellow tinge of the other woodwork, which we used linseed oil or polyurethane on. Here’s the floor, all sanded and finished, ready for some furniture:

A week later, at the end of July, the movers showed up, and by 5pm we had everything moved in. We made the bed, cooked a quick meal, and toasted our first night in our crazy art house. The next morning, I rolled over and took this picture from bed, our first morning in Nerdwood:

Still no stairs or upstairs bathroom, so we had to go outside, down the deck stairs, and back inside to use the bathroom, but it’s warm out, and we’re home.

“Home is just emotion,
Sticking in my throat” -Lene Lovich