This past winter was surprisingly brief. By mid-March the ski trails were mostly bare, as opposed to years past when we would be on the trails through early April. So, back to Nerdwood. Surely we’ll get it closed in this year! We’re going through logs at an alarming rate, though. The pile that was three years old in late 2006 is getting more and more rotten as it sits out. If we had it to do again, we would de-bark, cut, split and stack the entire pile of logs first so they would dry out quickly. Since we haven’t built a cordwood time machine, though, we’ve been cutting up what we can this spring and looking at obtaining some additional, fresher logs to make up for the rotters.

Someone Clare works with had cut some cedar this spring and offered it to us (thanks, Bill!), so we’ve been stopping by his place for pickup-truck loads, debarking and cutting it up straightaway, and putting it in the kiln to dry. We’ve also been expanding our food production. We love mushrooms, so we’re cultivating some varieties this year. Here’s a mushroom bed, with a potato bed to the left: 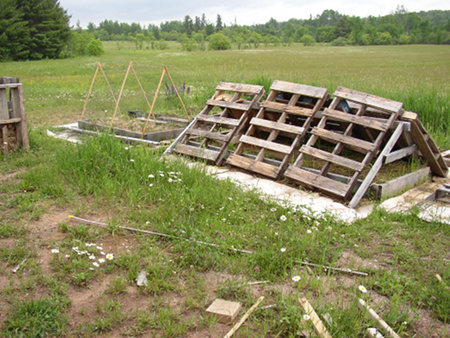 We also put in some fruit trees; someday there will be a nice orchard in front of the shed. We had to put the trees in “jail” since deer munched the leaves almost immediately after we planted them: 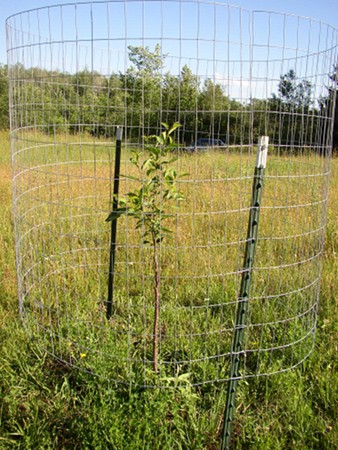