The snow hit hard in December and continued through January. Temps stayed cold and the snow piled up an the roof. Up and up and up! Had to have had three or four FEET of snow on that shallow roof. Fortunately, the frame didn’t budge. In February, it warmed up enough that all that snow came off the roof at once, creating a GIANT mound of snow behind the house. Here I am, standing on the mound. I can easily see into the second floor:

Another couple of late snowstorms left an additional mound in the back, closer to the house – apparently it didn’t come down with as much velocity as the original avalanche. By late April, all the snow had melted except for our roof remnants: 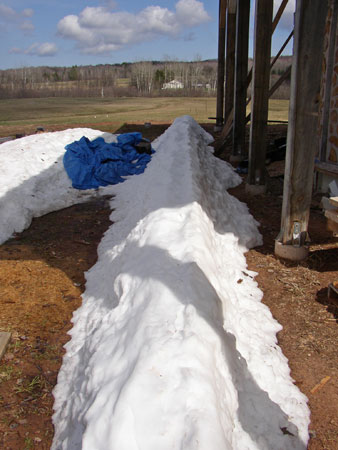