Well, we hoped to get the roof up before the snow fell. Here’s how it went:

We got to work on the center section of the second floor. This is comprised of eight-by-eight posts and beams and holds up the roof where it passes over the middle of the house. We used the Little Lifter to hoist pallets of timbers up to the second floor, then we set them in place by hand. The two beams on either end stick out over three feet past the outside wall, to provide a wide roof overhang. Because these beams were so heavy, we set them into place with the crane. This was fun, not unlike those games in the arcade where you try to grab fabulous prizes (i.e., disappointing junk) with the claw. Except those prizes won’t kill you if you drop them on your head. For the most part. I’m wearing the orange “please don’t shoot me, I’m neither a deer nor a partridge” hat, manipulating the crane with a little control box: 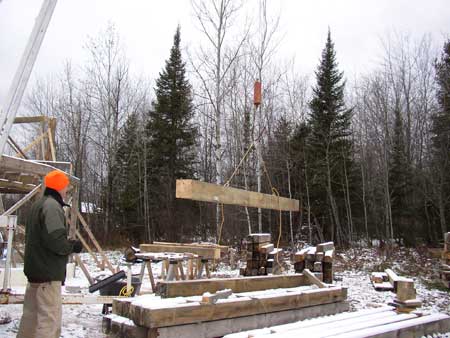 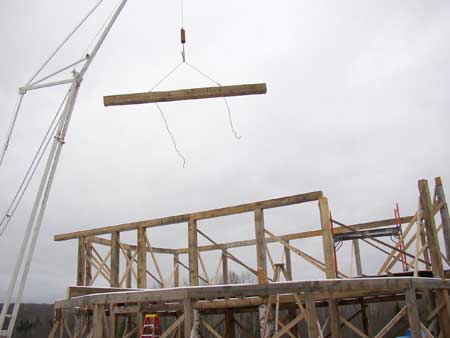 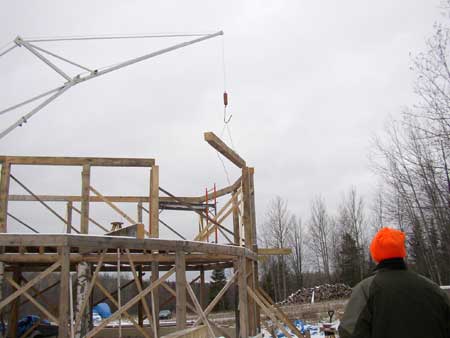 Once it’s really close, Clare gets up there with a two-by-four to help the beam into place: 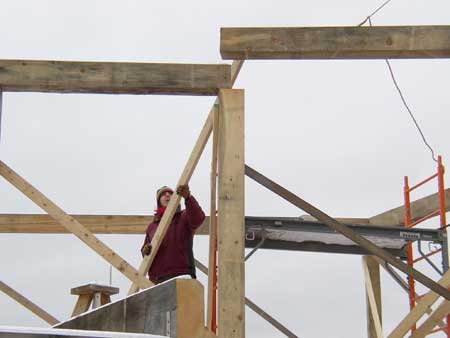 Of course, after all that work, it’s a good idea to drive into Tapiola and get some pie at The Feed Mill:

The pictures above were all taken around Thanksgiving. As you can see, very little snow, in fact it all melted Saturday after Thanksgiving. I finished cutting timbers for the top level and stacked them in the house Sunday afternoon.

The next evening, Monday evening, the snow started. It stopped for a few hours here and there, but pretty much continued all week. The following Saturday, December 1st, Richard Brooks and I went to rescue his truck – in the winter, it’s his plow truck, and we had at least three feet of snow for him to use it on. Here’s how the house looked one week after the pictures above: 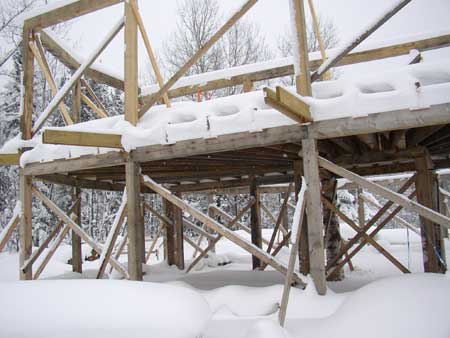 We went skiing that same day – over a month and half earlier than last winter. Granted, it’s not unusual to have lots of snow by December 1st here in “Big snow country,” but it really did hit all at once and has not let up since.

Unfortunately, I think those timbers I cut are going to have to wait until spring, as will the roofer. A bit of a disappointment, but I don’t see how we could have worked on the house more and still kept our jobs. Since we can’t cordwood until there’s no chance of frost, which is May 15 around here, I think we can still start cordwooding on time next year. We just might not have as many logs stacked as we had planned. Still, it sure is pretty around here: 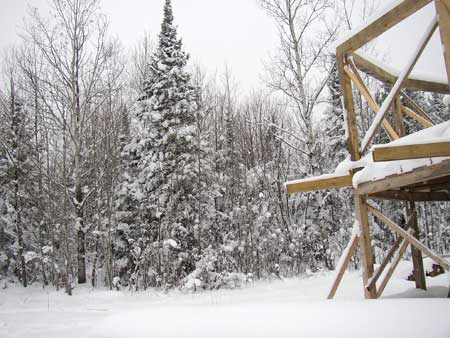 5 Replies to “The BOLD winter”