We’re in the middle of framing the second floor now, hoping the weather continues to play nice. The posts and beams we’ve used so far for the second floor have been brought up the old fashioned way – with two people, a few muscles and a couple of (quickly tired) backs. This will change soon (more on that later). After the first day of framing (posting? No, wait – that’s what I’m doing right now), we had four posts up: 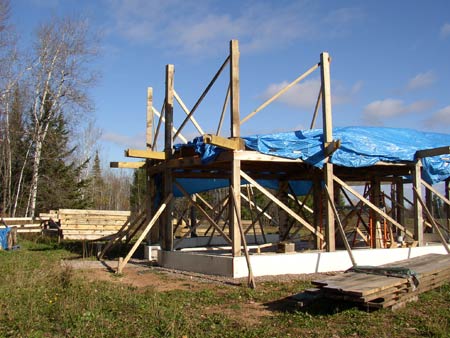 One of the many time-consuming tasks before we could put up the posts was to put the deck joists in place. You can see them in the photo above sticking out of the side of the house under the new posts. These will hold up the second-floor deck on the front and sides of the house. We eventually need to put up three more sets in between each of the ones you see here, but these particular ones had to go up now since they are holding up the posts above them.

Besides the fun of having a deck, it serves the purposes of protecting the first-floor cordwood walls from direct weather and shading the first-floor windows from the high summer sun. In the winter, the sun is low enough in the sky to get in and heat up the first floor slab.

We continued with the front posts and beams until we finished a week or so later. At that point, we had to put up two massive (six-by-twelve, thirteen foot long) beams that go over the living room. Since these were way too heavy to lift ourselves, we asked Richard Brooks (inventor of the Lizard, see past post) if we could rent his crane truck: 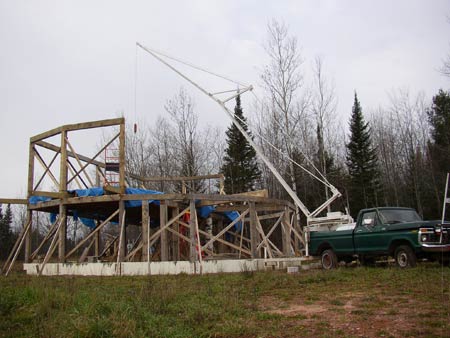 This truck is another of his inventions, the “Little Lifter.” Richard and I hoisted the big beams into place in about half an hour – not only a time-saver, but a back-saver as well. We’ll use the crane to hoist smaller timbers up to the second floor in twos and threes, then place them by hand. We’ll also use it to set some larger timbers that support the roof. 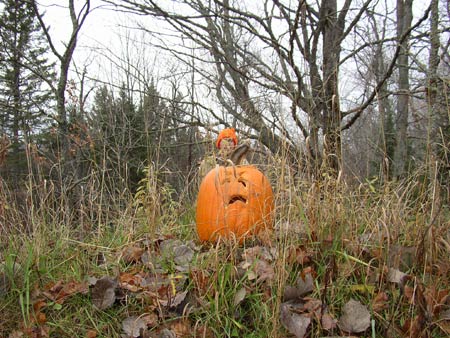 After a pumpkin break, we enjoyed “Sunset over Nerdwood:” 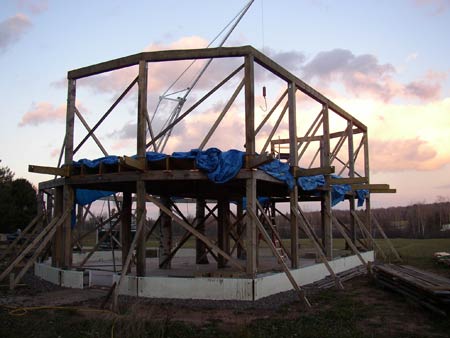