Sure, Peak Oil is a problem, but we have experienced Peak Log here at Nerdwood. As of July 2010, the pile of logs we have been drawing from – cut in 2003 – are getting more and more rotten. We have to discard more, the ones we use take longer to clean, and we’ve realized that we might not have enough to finish the house.

To help speed things along and to ensure we have plenty enough logs, we asked our neighbor Emanuel (who has a sawmill and has been providing us with cedar boards for the window boxes) if he could help us find five or six cords of recently-cut cedar. Not only did he find us some, he delivered it to our house as well.

We hired a couple of students from he nearby University (we called them Nerdlings) to come out and peel the new logs for a few days, thinking the best way to keep them from rotting would be to peel, cut, split and stack them as quickly as possible. This is what we should have done with the initial pile of logs but we didn’t since we couldn’t wait to get started on the house.

Unfortunately, peeling the new batch of logs ranged from somewhat difficult to impossible. They had been cut in February and the bark was just cemented onto some of them. The Nerdlings peeled the less-cementy logs and did a bang-up job of it. We then cut them and put them into the kiln. While all this was going on, we continue to cordwood the upper level in the back of the house: 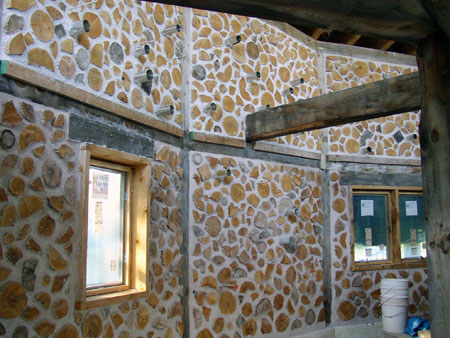 It’s now early September and we have a LOT to do if the house is to be closed in, insulated and heated by early December, when the snow usually starts to get serious around here. We hired our friend Matt to help with a bunch of carpentry tasks. Here he has framed out part of the top level: 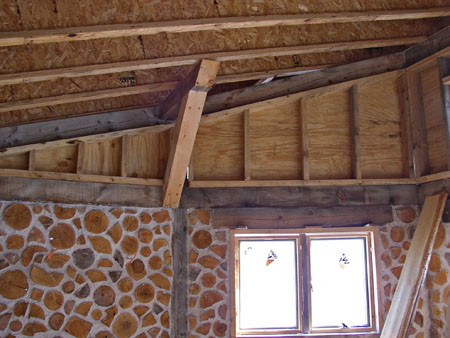 We also picked up some storage tanks. we plan to put them under the porch and direct rainwater into them to use to irrigate the garden and possibly the orchard in times of drought. They had been used to hold garlic-flavored oil for industrial food production (i.e., frozen pizza) and are pretty garlicky right now: 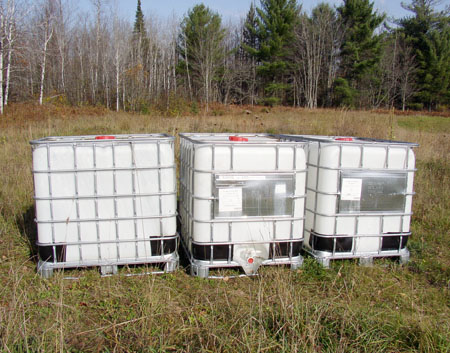 So now we have logs drying in the kiln and we’ve just about run out of wall-ready logs. In addition, the rain has been frequent and I’m getting a bit worried about “Peak Sand.” Can we get the outer wall cordwooded before October’s frost? Stay tuned…