So, the (all-too brief) ski season gave way to mud season and now we’re into prime building season. The basic structure of the house will be constructed in the following order:

Building this way allows us to cordwood under a roof, plus the inspector likes it since the load-bearing structure is done in a way very familiar to him. The plan is to finish the frame and get the roof up this summer/fall (2007) and start cordwooding spring of 2008.

We had ordered the timbers from a sawmill about 30 miles away last July. I would call every month and they would always be “just about ready” to start cutting them. I wanted to go with them because they are fairly local and they gave me the lowest bid.

Well, around this April, I just couldn’t wait any longer, so I started trying other places, places I had missed the first go-around. I found a guy, a retired shop teacher who makes furniture in the winter and runs a sawmill in the summer. He seemed genuinely interested in the house and had a lot of good questions and suggestions. We decided to go with his outfit, Frog Valley Woods, and he began cutting our timbers in mid-April.

Unfortunately, the fresh-cut timbers need to dry for awhile before they are stable (they shrink as they give up water), so they won’t be ready until mid-July. On the other hand, we have plenty to keep ourselves busy – cutting logs and (in a week or two) starting to cordwood the shed.

Originally, the center of the first floor was to have four large upright timbers in a square, framing the masonry heater and holding up the second-floor loft. Clare thought it would be cool to use full birch logs instead of cut timbers, and having seen something similar in another house Dave Bach worked on, I had to agree. George Beveridge, who is building a cordwood house nearby, said he could cut us four such logs as he was thinning his woods. 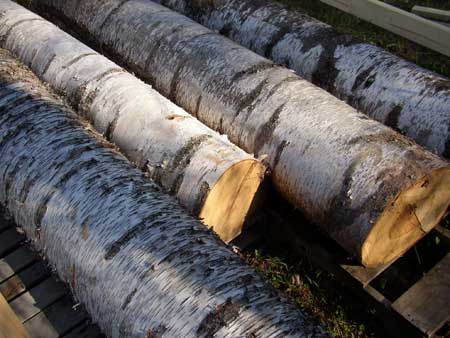 Well, those logs turned out to be a bit larger than I had envisioned, and way, way heavier! George lowered two into our Toyota pickup and the other two into Matt Manders’ Toyota pickup, and springs groaned, tires sagged and tailgates bent. We drove them to the land where we met Tom and Matt. No way were we going to lift them out of the truck beds, even with four hale-n-hardy guys. Fortunately, Matt M had a towing strap and the idea to tie one end to a log and the other to a tree near the foundation. Then, we would drive the truck away leaving the log on the ground. Worked like a charm! Above are the four logs, now drying.

Next (hopefully), we get our hands dirty and start stacking some logs. 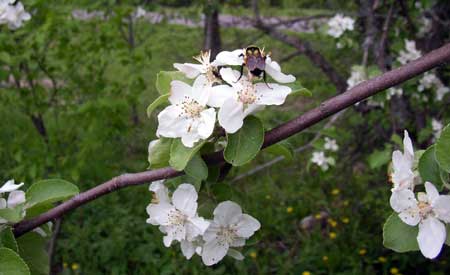